in the weight category 71 kg.  Competitions included in the official schedule of tournaments KOK and IBF, and conducted in accordance with the rules of K-1. According to the regulations in the main eight will attend two fighters from the Republic of Moldova in the 71kg category, it is the European champion Cristian Dorel KOK EUROPE GP 2011, the Cup KOK WORLD CUP 2011 and Matei Vitalie multiple winner of the tournament according to the K-1 and Muay Thai. Also in the tournament „KOK WORLD GP 2012” will be held superfights in which the skill will show Constantin Tutu, Pavel Voronin, Maxim Railean. 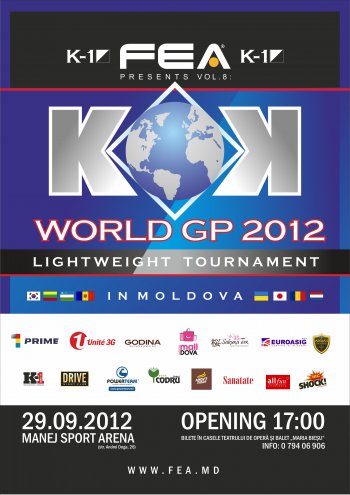 Tickets for the event can be purchased at the National Opera and Ballet MARIA BIESU. Tickets from 100 lei.
The address of the championship: athletic arena Moldova. Str. Andrew Doga 26. OPENIG 17:00.
Telephone offices of the National Opera and Ballet Theatre: 0 22 24-51-04.
Hours of operation: Tuesday to Sunday from 9:00 to 18:00
(off – Monday).
Tickets for the VIP seats and parterres marked on the scheme yellow and green can be ordered by calling 079 406 906. 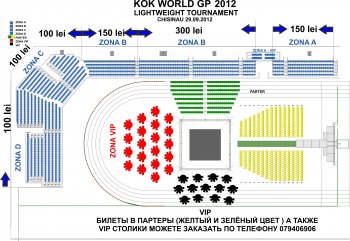 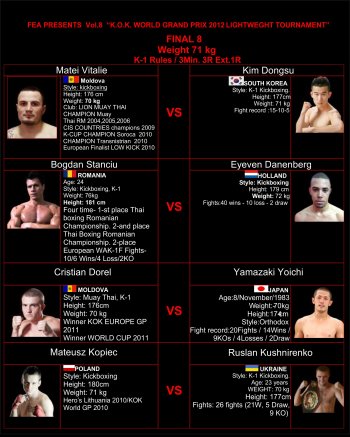 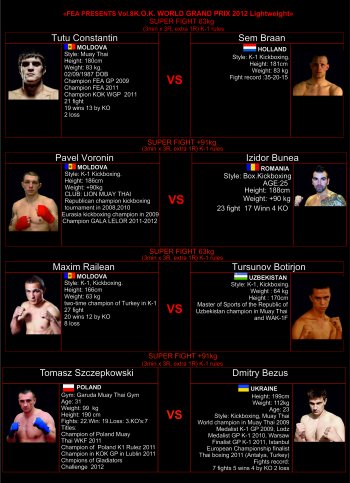 The KOK WGP 2012 Lightweight tournament took place today in Chisinau, Moldova, featuring a one night, eight man tournament at 71kg as well as a fight between two of LiverKick\’s top 10 at light heavyweight.

Two LiverKick Top 10 light heavyweights faced off as Constantin Tutu met Sem Braan. It was a very close fight that probably could\’ve gone to an extra round but Tutu was given the decision victory. It was rather disappointing though for Tutu, as his cardio was not very good and he was noticeably tired, especially in the third round. In order to really establish himself, Tutu will need to start fighting outside of these KOK events in Moldova and improve his cardio dramatically.

Quarter Final: Dongsu Kim def. Vitali Matei by decision in an extra round.

Quarter Final: Mateusz Kopiec def. Ruslan Kushnirenko by decision in an extra round.

63kg: Maxim Railean def. Botirjon Tursunov by KO in Round 3.