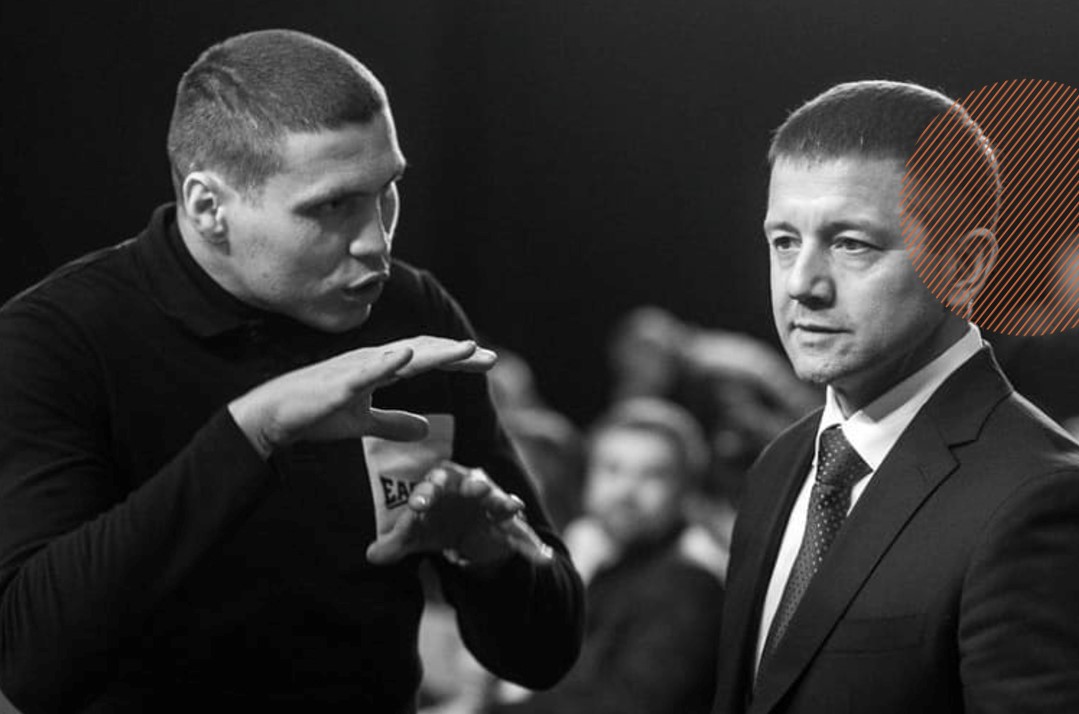 In a recent IG LIVE Dorin Damir and EAGLES FC head judge Pavel  Pocatilov talked about the following. Part 1
Short autobiography?
I was born on the 28th of June 1987, in Dubasari, Transnistria. After school I was accepted in the Police Academy. Got my bachelor’s degree. Afterwards I worked as criminal investigator. While getting my master’s degree at the Police Academy I was also enrolled in the Academy of Public Administration. After graduation, I was employed by a private company. But at that time, I was already involved in sports, and slowly started focusing more and more on it.  I got married 5 years ago, have a two-year-old daughter.

As the head judge of EAGLES MMA, do you agree that from all contact sports, mixed martial arts are the hardest to judge?
Some might think otherwise, but my personal opinion is that kickboxing and boxing are the hardest to judge, since there are a lot of punches and kicks, which makes the counting difficult. Meanwhile in MMA, most matches end ahead of schedule, or there is a clear winner during the whole fight.  However, I’m sure that boxing and kickboxing judges would say the opposite thing.

Why did you quit professional fighting? You’re still young.
Since childhood, I had dental issues. I’ve broken my front two teeth (not in a fight), and by a doctor’s poor decision, instead of some dental bonding work I ended up with 4 implants. Since the roots of those teeth are weak, I can’t fight anymore.

How’s the relationship between you and you brother, Denis Pocatilov, since he’s an EAGLES FC referee? Do you argue a lot about certain decisions during the events and afterwards?
When it comes to sports, I can’t argue with him, we were raised the same way and we think almost identically. I would end up fighting with myself in a way.  We might argue about other things, but rarely.

Dorin Damir  and  Pavel Pocatilov  talked about Bare Knukle Fighting, Cutelaba vs Ankalaev, and other stuff.
Your thoughts on bare knuckle fighting?
I think there’s high risk of injuries. This depends on the level of a fighter’s preparation. If they know how to protect themselves, then it’s ok. But if the fighter is used to a life-or-death kind of onslaught, then it’s a no for me. I’m not against this sport, but I, personally, wouldn’t practice it.

Who the course of your life influenced the most?
I think that I’m a lucky person. I always meet the best people who have a key role in my most important decisions. There was someone who recommended me to go in the Police Academy, otherwise I would’ve applied to the medical university, and sports wouldn’t existed in my life. Later, when I was working, my coaches Puiu and Ivan Gheorghiu, indirectly influenced me to continue my sports career, as opposed to focusing my law career, which lead to great results in the end.

Your opinion on the first Cuteleba vs Ankalev bout. When the fight was stopped and Cutelaba protested. What would you have decided as a judge?
I think Cutelaba’s strategy was to play dead and counterattack his opponent when Ankalaev would’ve jumped defenselessly to finish him. There is a risk, if you’re to good of an actor, they might actually stop the fight. If this was an amateur or debutant’s match, it would’ve been fair to stop the fight, to protect the athlete’s health. But since this is UFC we’re talking about, top professional fighters, I think they should let them completely finish off their opponents. To conclude, my opinion is they should’ve continued the match.
(to be continued)

Dorin Damir  and  Pavel Pocatilov  discussed Romanov vs Espino, Spivac vs Oleinik, the revival of the HEROES project and politics.
Your thoughts on Romanov vs Espino?
A kick in that area can totally destroy the focus and preparation you had for the match. A personal example. I once, during a fight, broke a toe. I didn’t feel pain or something, because of the adrenaline. But since it wasn’t in its place, I felt like I’m sliding, I lost my balance. However, I think the right thing to do in Romanov’ case, was to declare a “no contest” and schedule another fight. But since they decided to count the points and judge the fight until that point, I’m agreeing with the result.

Your thoughts on Spivac vs Oleinik?
I hadn’t worked with Spivac, but watched his fights. But I know Oleinik as a trainer. He’s very determined, hardworking, but very lucky as well. I think there’s a 60% chance that Oleinik will cunningly win.

We’ve decided to revive the HEROES project, from which we will select young fighters, who haven’t fought professionally before, for the bigger projects, EAGLES FC and FEA Kickboxing. Your stance on this?
I think it’s a necessary project. Since fighters can try themselves in a professional setting and prepare for the bigger projects. Many of them may have a lot of experience in amateur championships, but when you go pro it’s a whole another thing.

Are you thinking about going into politics?
I, as the president of the Mixed Martial Arts federation, think that sports should be apolitical. I wouldn’t’ allow myself to openly support one party or another.
The end!
Full IG LIVE in russian  @dorin_damir_official